These keto cinnamon rolls with cream cheese frosting are quick to make, extra fluffy, soft, and incredibly delicious. Ready in only 20 minutes, prepare low carb fathead cinnamon rolls for breakfast or as a sweet treat for you and your family.

Everyone raves about these gooey keto cinnamon buns because they are one of the best breakfasts. You can make these easy fathead cinnamon rolls or make pancakes, protein pudding, or bagels.

So if you’re craving cinnamon rolls that are easy to whip up, keto-friendly, and grain-free, this recipe is for you.

It’s a delicious recipe perfect for making on cold days because it will warm your house immediately or even in the hot season, served with a cup of ice cream on top. Not to mention the smell of cinnamon that fills the house.

Keto cinnamon rolls are delicious served warm because they are super soft on the inside and have the best crunch on the outside. Pair them with a cup of tea, coffee, or milk for breakfast. You can also change the filling; think homemade Nutella, delicious, right?

Why Are You Going To Love This Keto Cinnamon Rolls Recipe

Traditional cinnamon rolls are not keto-friendly because they are made with wheat flour, sugar, and other high in carbs ingredients. Homemade cinnamon rolls have over 70 grams of carbs per serving which may kick you out of ketosis.

But fortunately, you can easily make a keto version of cinnamon rolls by replacing some ingredients, and the result will be just as delicious but with fewer carbs. No one can tell these rolls are actually keto friendly.

For these fathead cinnamon rolls dough cinnamon rolls, you’ll need just a few wholesome ingredients that you probably already have in your kitchen.

The process of making the cinnamon roll dough is super similar to fathead pizza and fathead bagels. So make sure to check those recipes for more tips and tricks. It’s super easy to make this chewy dough that’s perfect for keto baking and doesn’t taste like mozzarella at all.

How To Make These Keto Cinnamon Rolls

These keto cinnamon rolls are easier to make than the traditional recipe that requires tons of kneading and resting time. The result is heavenly and worth the time invested. Here is everything you have to do:

How To Serve These Keto Cinnamon Rolls

These keto cinnamon rolls can be eaten as they are, warm or cold, but also with cream cheese, chocolate, vanilla, maple syrup, or even ice cream. They are also amazing with a cup of hot tea, hot chocolate, or coffee.

What Are Cinnamon Rolls?

Cinnamon rolls are among the most famous sweet treats with cinnamon that delight both with the fluffy interior, the baked, slightly crunchy crust, and the delicate cinnamon flavor.

Can I Make This Recipe Ahead Of Time?

If you want to enjoy these keto cinnamon fresh baked in the morning, you can prepare the rolls in advance, store them in the fridge and bake them the next day for a delicious sweet and warm treat.

Is Cinnamon Allowed On Keto?

Definitely, cinnamon is a keto-friendly ingredient that helps reduce blood sugar levels and is also great for those with diabetes.

What Should I Do If My Dough Is Too Sticky?

You don’t have to be worried if your dough is too sticky; add a tablespoon of almond flour and mix until the dough has the right consistency.

How To Reheat The Cinnamon Rolls?

If you want to reheat your cinnamon rolls, you can do that in the microwave. Place the cinnamon roll on a microwave-safe plate and microwave it for about 30 seconds.

Can I Use Coconut Flour Instead Of Almond Flour? 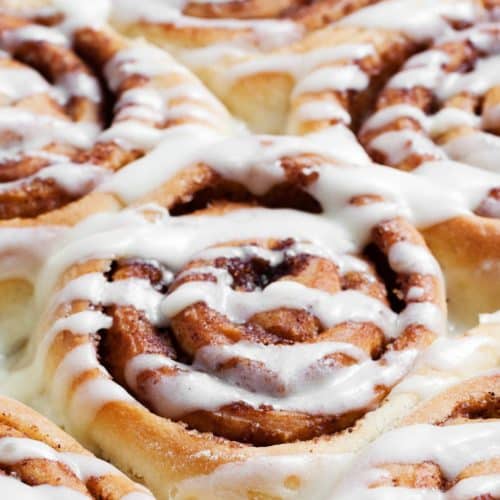 These keto cinnamon rolls with cream cheese frosting are quick to make, extra fluffy, soft, and incredibly delicious. Ready in only 20 minutes, prepare Low carb fathead cinnamon rolls for breakfast or as a sweet treat for you and your family.

How do we calculate the nutrition info?

These nutrition facts listed are determined using nutrition information from the USDA Food Database. Our nutrition facts are accurate, but if you are using different products, please make your calculations. Net carb count is calculated by subtracting both fiber and sugar alcohols because they don’t raise blood sugar.