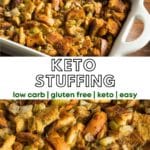 This is the best keto stuffing recipe made with low carb cornbread, onion, celery, butter, and other delicious herbs. It’s loaded with flavor, crunchy on the outside and buttery on the inside.

Until recently, I thought that turkey was the star on the Thanksgiving table, but stuffing is also really important on a Thanksgiving spread.

So if you are looking for easy and delicious low-carb stuffing for thanksgiving and not only, then you need to try this recipe. It’s easy to make, feeds a crowd, doesn’t take long to put together, and the result is well worth it! Trust me when I tell you that you won’t find a better recipe and easier to prepare than this.

Why Are You Going To Love This Recipe

Traditionally, stuffing is not keto-friendly because it’s made with white bread that’s too high in carbs. But fortunately, you can still enjoy stuffing on a keto diet by making a few easy changes.

For this low-carb stuffing, you need a few ingredients that are cheap and very accessible. Here is a note on the ingredients:

How To Make Keto Stuffing (Dressing)

To prepare this delicious stuffing, follow the next few simple, easy steps. Here is everything you have to do:

Stuffing and dressing are usually confused since they are practically the same thing with a few small differences, depending on how they are cooked. So since stuffing is generally used to stuff a turkey or chicken, dressing requires only to be baked and then enjoyed as a side dish.

What Bread Is The Best For This Low-Carb Stuffing?

When choosing the bread for this recipe, make sure that it is moist and fluffy because once cooked in the oven, it will get the perfect texture for the stuffing.

Can I Use This Recipe To Stuff My Turkey?

Sure, use the following steps of this recipe until the baking step. Then instead of baking it in a pan, fill your turkey with it. Just make sure the stuffing reaches 160 degrees Fahrenheit.

Can I Make This Recipe Ahead Of Time?

Sure, prepare the stuffing as instructed in the recipe card below. Then, after you put it into the baking dish, wrap it in plastic foil and store it in the fridge. Then when you are ready to eat it, bake it in the oven for 20 minutes.

Can I Use Eggs to Make Stuffing?

My recipe doesn’t call for eggs, but you can use eggs to bind everything together and help the stuffing hold its shape. Whisk 2 large eggs into the stuffing mixture before baking. 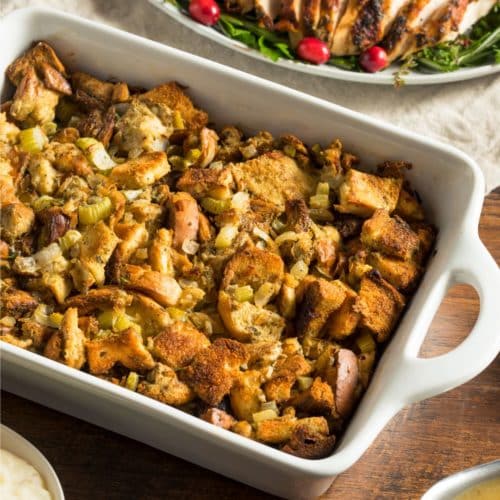 This is the best keto stuffing recipe made with low carb cornbread, onion, celery, butter, and other delicious herbs. It’s loaded with flavor, crunchy on the outside and buttery on the inside.

How do we calculate the nutrition info?

These nutrition facts listed are determined using nutrition information from the USDA Food Database. Our nutrition facts are accurate, but if you are using different products, please make your calculations. Net carb count is calculated by subtracting both fiber and sugar alcohols because they don’t raise blood sugar.