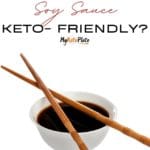 Are you wondering if you can have soy sauce on a low-carb keto diet? Well, in this post, you will find the answer, the carb content of soy sauce, and some of the best replacements.

What Is Soy Sauce?

Soy sauce is one of the oldest spices in the world! It has been used for over 2,500 years in China, where it has spread, first to Asia and then to European cuisine.

Soy sauce is a fermented ingredient made from soybeans, water, and salt. Widely used to flavor food, especially in China, Japan, Korea, and Thailand, soy sauce has many different varieties in taste, consistency, salt content, although similar at first glance.

Let’s dig deeper and find out if we can have soy sauce on keto, how many carbs are in soy sauce, and other keto-friendly soy sauce alternatives.

With just 1 gram of net carbs per tablespoon of soy sauce, you could include soy sauce in your keto diet.

If you are not bothered by gluten and other soy by-products, you can easily include soy sauce even if you are on a keto diet.

So, it’s possible to enjoy soy sauce on a keto diet to enhance the flavor of some dishes while still being on ketosis.

Always check the nutrition label to see how many carbs per serving are in your bottle of soy sauce. Carbs in say sauce vary greatly due to their type.

If you’re looking for a keto soy sauce alternative, here are a few options:

According to the USDA website, one tablespoon(16g) of soy sauce provides:

How To Store Soy Sauce

Unopened soy sauce can be stored in a cool, dark place on the shelf. And once opened, the soy sauce should be stored in the refrigerator for optimal flavor.

I love using soy sauce in tons of recipes,, but you can substitute it with coconut aminos if you prefer.

This Crack Slaw is seriously addictive, delicious, and easy to make. It will become a staple weeknight dinner at your house. Enjoy a tasty egg roll in a bowl that’s ready in 15 minutes, with simple low carb ingredients.
Jump to Recipe Print Recipe

How To Cook Butternut Squash